Quarterly, the National Association of Realtors (NAR) updates median home value indices on both a national and metropolitan area level. At this point, most credit unions probably don’t need NAR data to tell them how the current market is trending. The rebound in the housing market over the past 5 to 7 years has been felt in just about every corner of the country, and lenders have reaped the benefits of strong collateral positions and fewer defaults. 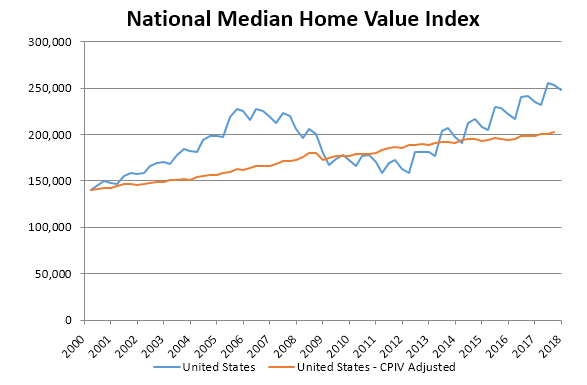 In Q4 2017, NAR measured national median home values at $247,800, representing a 5.3% gain year-over-year. In each quarter during 2017, median home value surpassed the previous record high related to that quarter, and compared to expected median home value based on inflation, actual values are about 25% higher.

Growth is Widespread, not Concentrated

A nuance of the recent growth in median home values that contrasts with the run-up from 2005-2007 is that the growth is widespread across most metro areas and not concentrated in a few hot markets. In fact, 162 of the 177 markets measured saw median home values increase year-over-year last quarter, and all-time highs were reached in 114 markets. Below is a breakdown by region of Q4-to-Q4 growth:

You can see that while there is distribution around the national growth rate (to be expected) there is not a massive disparity in growth between regions. Certainly, there are some pockets of hotter growth out West – looking at you, San Jose (26.2% YoY growth) – but the distribution of markets exhibiting an 8% or greater increase in the past year is fairly even between Midwest, South, and West markets.

Home value growth has been a huge benefit to current homeowners, bolstering the equity position in likely their most valuable personal asset. However, the reasons behind the value increase is putting a strain on those looking to buy into the housing market. In their press release, NAR’s chief economist Lawrence Yun made sure to point out a sobering fact: while median home values nationally have increased by 48% since the market bottomed-out, incomes have only increased 15%. This chasm could grow even larger considering that the national inventory of homes available for sale decreased by 10.3% year over year in Q4 2017. So while current homeowners are reaping the benefits of capital appreciation, perspective homeowners are starting to encounter difficult conditions.

Is it possible that we have seen the housing market approach its peak in 2017? Lacking a crystal ball, I can firmly say “maybe”.

Some of the conditions that are baked into the hot market are likely to remain. The inventory problem could be resolved by an increase (boom) in new construction, which hasn’t happened yet, but January 2018 data shows may be on the horizon. And although income growth has straggled behind home appreciation, even modest growth in income is welcome considering how stagnant wages were before that. Also, historically low unemployment and swelling consumer confidence point to strong demand for housing at least in the short-to-medium term.

However, there are still a lot of unknowns:

• How will the new tax law play out considering there are some provisions that make owning a home less tax advantaged?

• The Federal Reserve is planning on raising rates several times again this year, which will eventually make housing less affordable. But when and to what degree?

• The recent talk of tariffs by the Trump administration could also have unintended consequences on the American household, as well.

• And all of these factors are sure to have an unknowable effect on equity markets where household wealth is stockpiled and from which economic confidence is shaped.

With many competing factors and effects of how those factors will interact, it is best to be prepared for a worst-case scenario – even when markets are soaring. Because the future isn’t totally knowable, it is in the interest of credit unions to understand how increasing credit and collateral risk will affect their loss reserve and capital position. Having a robust methodology for stress testing home values and credit quality, at the loan level, can help you plan for expected loss to the credit union, and understand where your capital cushion needs to be to withstand deteriorating circumstances.

To learn more about 2020 Analytics’ approach to grading risk, identifying potential losses, and stress testing, feel free to reach out and we would be glad to set-up a demo.

John is a Senior Analyst with 2020 Analytics.  He works with clients on loan portfolio risk engagements and development of alternative analytics.

John Has 33 years of experience working at credit unions with their loan portfolios.  John was most recently with Heartland Credit Union and has also worked with CUNA Mutual Group, Baxter Credit Union (BCU), and Corporate America Family Credit Union in various lending roles.  John holds a BS in both Economics and Business Administration from Winona State University and is in year two of his CCUE certification.