Portfolio Trends: Does your Auto Portfolio have a Blind Spot?

In late-2015, Twenty Twenty Analytics noticed a trend in our client automobile portfolios: current auto collateral values were decreasing at an increasing rate compared to previous years. After some internal discussion, we decided to have a chat with our auto valuation business partner, Black Book Lender Solutions. Black Book informed us that, according to their data, the average depreciation on autos in 2015 for the past 5 model years was 13.2% with 7.2% of that depreciation occurring in Q4. The 13.2% depreciation rate in 2015 contrasts with the 11.8% depreciation rate observed in 2014. To simplify, lost value on vehicles was 1.4 percentage points higher in 2015 compared to 2014, and over half of the value lost in 2015 occurred in the final 3 months of the year.

After our chat with Black Book, we decided to dig deeper to see if the observed trend was supported by Credit Union reported data. Using Call Report-aggregated data from Callahan’s Peer to Peer, Twenty Twenty Analytics found substantial deterioration in recovery rates on auto loan charge-offs from 2013 to 2015. The following tables show that recovery rates at the end of 2015 have receded noticeably from the prior quarter, and since Q2 2013. 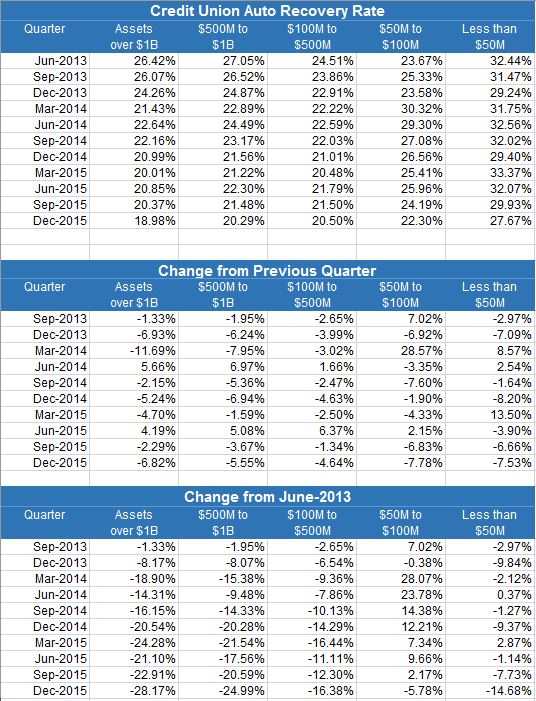 This confirmation of a decline in auto values during 2015 indicates that collateral deterioration in auto lending isn’t just a trend that Twenty Twenty Analytics is seeing, but that it is a trend meaningfully impacting Credit Unions across all peer groups. But why?

In 2015 cars depreciated twice as fast as trucks. According to Black Book, average depreciation on cars was roughly 18% whereas trucks only lost around 9% of their value. So why the stark difference? Part of the answer is gas prices. The sustained increase in gas prices between 2007 and 2014 made it cost prohibitive to own a truck. Instead of buying gas guzzlers, consumers opted for smaller, more fuel efficient cars until a shift in gas prices occurred in mid-2015. According to AAA, fuel prices averaged $2.40 per gallon in 2015 which registers as the lowest annual average since 2009. Naturally, consumers decided that the value of driving a Prius or Volt decreased when gas prices fell. In turn, the demand for trucks increased, which propped up truck values, and sent car values spiraling downward.

Out of Contract Leases Flooding the Used Car Market

By the end of 2015, nearly 3 in 10 new car acquisitions in the United States were leases, according to Experian Automotive. This represents an increase in leasing by roughly 50% since the end of 2010. This trend, coupled with a typical lease term lasting between 2 and 4 years, has resulted in a glut of end-of-lease vehicles hitting the used car market. Black Book reports that at the end of 2009, there were less than 100,000 certified pre-owned vehicles on the market compared to an estimated 220,000 during 2015. The surplus of 2 to 3 year old cars resurfacing in the used car market has exerted downward pressure on vehicle prices.

U.S. Census Bureau data shows that real median household income has been close to stagnant in the United States for over a decade. Essentially, the American Workforce hasn’t gotten a raise since 2003 while the prices of new vehicles have increased considerably. Under such circumstances, it is likely that borrowers would stay in their current cars longer or rely on the used car market to obtain their next vehicle. From 2014 to 2015, the average amount financed on a new vehicle purchase grew by 4.1% as compared to just 1.6% for used vehicles, according to Black Book. This confirms that there is a relative premium on new cars, and reflects higher depreciation on used cars. More significantly, both new and used cars saw roughly half the amount of growth in average monthly payments (2.6% and 0.8%, respectively). This is indicative of longer loan terms – a likely way to fit borrowers into more expensive loans without the burden of a higher monthly payment.

How is this Impacting Lenders?

The broad trend among our clients has been to write auto loans to higher risk (lower FICO score) borrowers in an attempt to generate yield. This has left lenders in a potentially frightening scenario: loaning to higher risk borrowers while facing a period of increased collateral risk means an increased probability of default and a greater loss realized in the event of default.

While additional risk is present, Twenty Twenty has seen this strategy pay-off for our clients. Generally, our clients have experienced higher yields after charge-offs on vehicle-secured loans at riskier originating FICO scores than on prime vehicle-secured loans. This underscores a point that we often make to our clients: lenders shouldn’t avoid risk, but they should quantify the amount of risk they are taking while considering the factors that impact vehicle collateral positions. Lenders that understand factors such as the vehicle mix collateralizing their portfolio, the impact of financed add-ins (warranties, etc.), and the effect of extended loan terms are better positioned to understand their auto portfolio’s collateral risk.

Considering these trends and fundamental factors, it is likely that we will continue to see high levels of depreciation in the coming years. With high levels of depreciation comes the likelihood that your auto portfolio will see increased levels of exposure, and your loss given default will increase. This is particularly magnified in portfolios where the bulk of the originations have occurred within the past 18 months, as it typically takes that long for an auto loan to reach a breakeven LTV. Thanks to Twenty Twenty’s relationship with Black Book, we are able to soundly value auto collateral and help our clients identify and navigate collateral risk every day. In a time of decreasing collateral values, it is vital that lenders understand where their risk is coming from at the loan level so they can avert, mitigate, or at the very least, reserve properly for losses that are bound to occur.

In addition to our own data, data in this passage was sourced from: Callahan’s, AAA, Black Book Lender Solutions, and Experian Automotive